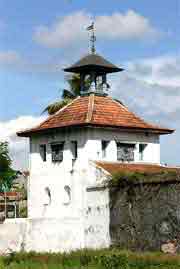 Jewish Synagogue? is an ancient Synagogue whose beautiful aura attracts the attention of travellers from across the globe. It was constructed in the year 1568 by the Malabar Yehudan people or Chochin Jewish community who were residing in Cochin at that time. People also call it Mattancherry Synagogue. It is situated in Cochin. There are six other Synagogue in the city but Jewish Synagogue is the only one in use. The land where the? Synagogue stands today was gifted to the Malabari Yehuden Jewish community by Rama Varma, the then king of Cochin. It was built just next to the Mattancherry Palace Temple sharing a common wall.

The Jewish Synagogue is an imposing piece of architecture. The tiles used in the? Synagogue were hand painted tiles which were imported from China. Interestingly no two tiles look alike. You eyes are bound to get glued to its shimmering crystal chandeliers. Its intricate wood carving work deserves mention. The carved wood with white and blue ceramic tiles speaks oodles about the craftsmanship of the then craftsmen. It is a home to rare artefacts such as the scrolls of the original Old Testament, the copper plates recording the promise of the king Ravi Verma to the Jewish settlers to settle permanently in Cranganore. Other attractions are the gold and silver crowns which were gifts from the royal kings of Kerala.

The Jewish Synagogue saw its own destruction during the wars of 1662.? Fortunately, later it was remodelled by the Dutch. New additions were also made to it to beautify it. It is open on all days except on Saturdays and Jewish holidays. The visiting hours are from 10 am to 12 noon and 3 pm to 5 pm.