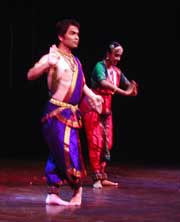 Dance and Music of Pondicherrey are mainly the extensions of other South Indian dance and music forms.

Some of the famous dance forms of South India are:

Bharatnatayam
It is one of the most famous dance form in India. Initially when it began it was? performed only by Devdasis or 'maids of God' in the temples. It is the oldest of all classical dance forms. Mainly a solo dance, it is extremely strict dance form when it comes to techniques of performing it. You can read its history mentioned in the Natya Sastra, written by the great sage Bharata Muni. The dance is a fusion of two elements: Nritta (pure dance) and Nritya(expressive dance). Colourful bright costumes worn by the performers make the dance more interesting. Both women and men perform this dance form.

Kathakali
It is finest form of dance whose history dates back to the courts of the Kings where it used to be performed for entertainment. Flexibility of body is the key in this dance form. It is very dramatic dance involving masks and intense expressions. The theme of this dance is taken from mythology. The mudras are really difficult and demands oodles of practice. Facial make is an important feature of this dance.

Mohiniyattam
It is a devotional dance form belonging to Devdasis. The literal meaning of 'Mohini' is the 'maiden who steals the hearts of men'. It is also a solo dance involving graceful body movements.

Dollu Kunitha
This dance form is steeped in rituals and is very popular in Karnataka. The performer dances on the beats of drums coupled with song. It is mostly performed by the menfolk of the shepherd community which is called Kubra community.

In this dance form, all the main characters reveal their identities on the stage with the help of composition of dance and music. It is basically a dance drama which has around 80 dance sequences in the dance drama. The grace of this dance form can be truly experienced in the popular pot dance wherein the performer while balancing a pot on her head walk with her feet on the rims of a thali.