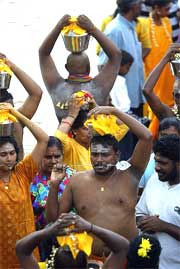 The rich culture of South India can only be truly experienced by participating in its festivals, savouring its cuisine, knowing its architectural heritage, experiencing the charm of its beaches and exploring its destinations. Each South Indian State has its own colourful culture consisting of several rituals and beliefs. The unique and vibrant culture of South India entices many a tourists from across the globe. The South Indian People are fully steeped into their traditions and beliefs. Be it dance, music, clothing or art and craft, South India is simply unbeatable. The traditional dress of a South Indian women is saree and the men wear a white pancha or a lungi.

The population of South India is approximately 233 million and the main languages spoken here are Tamil, Telugu, Kannad and Malayalam. People also know English. Tamil language has been give the tag of Classical Language by the Government of India in 2002. The primary occupation in South India is agriculture. South India has the highest literacy rate in India, Kerala being on top of the list having a literacy rate of 91 %.

The food of South Indian consists of rice, fish, coconut, idli, dosa, sambhar, uttapam and curries with lots of spice. Kerala Karnataka and Tamil Nadu are dotted with large coffee plantations. Hinduism is the dominant religion in South India but Buddhism, Jainism and Christianity and Islam are also followed by the people. Shaivite and Vaishnavite are the two important branches of Hinduism followed here. Christmas is celebrated with great enthusiasm in South India.

The mystical dance forms of South India are famous throughout the country. Kathakali, Oppana, Kerala Natanam, Theyyam, Koodiyattam, Mohiniyattam, Bharatnatyam and Kuchipudi are the most celebrated forms of dance of South India. The South Indian music is called Carnatic music which straight away enters the heart of the listener. Some of the famed composers of South India are Purandara Dasa, Kanaka Dasa, Tyagaraja and Shyama Shastri. The film industry of South India is also growing at a fast pace giving birth to new artists. South Indian artists are highly skilled in creating marvel out of marble and stones. Dravida and Vesara style of rock architecture from Tamil Nadu and Karnataka are the two different types of rock architecture prevalent in South India.

South India is an abode of countless temples built meticulously and beautifully. Tourists from far and wide come here to explore the beauty of these temples. Some of the well known temples are Kapileshwar temple, Brihadeshwara temple, Meenakshi temple, Navagraha temple, Krishna temple and Jain temple. South Indian culture is full of festivals which are celebrated with utmost zest by the people here. Pongal, Onam, Dance and Music festival, Hampi festival and Fire Walk festival are a few festivals celebrated enthusiastically out of many.