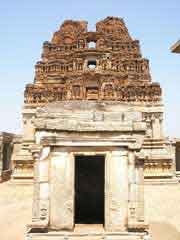 Resonating the imposing architectural style of Vijayanagara, Achyutraya Raya's temple was built 500 years ago. Its foundation was laid by an officer in Achyuta Raya's court. Hence the temple was named after him. It exemplifies the most advanced form of the temple built in Hampi. It was the last contribution of the Vijaynagara Empire before it declined. The temple is dedicated to the heavenly deity Tiruvengalanatha, a form of Lord Shiva. This north facing temple has beautiful "Prakaras". Prakara is an elevated enclosure. The external prakara boasts of an impressive gopura, located on its north side. While the internal prakara flaunts three gopuras in its east, west and south directions. The walls inside the prakaras are supported with huge pillars.

The central hall of the temple once had an idol of Garuda, the eagle God and Nandi,the vehicle of the main deity Shiva. It is dotted with intricately carved pillars which are considered to be the best pillars in Hampi. The veranda outside the central hall has pillars depicting lion faced Yalis standing on elephants.

There is a huge Kalyana Mandapa inside the temple but it is almost in ruins. Near this temple are the ruined market streets which were once the bustling bazaars of Hampi. Gandhamadana and Matanga hills form the backdrop of the temple and offers brilliant views. The surroundings of the temple are soaked in peace as the place is not a very upmarket tourist destination. However it is perfect for those who love to enjoy quiet moments with nature.