Lakshmi Narasimha Temple is dedicated to goddess Lakshmi, the goddess of wealth and lord Narasimha,one of the forms of Vishnu. The term Narasimha means half man and half lion. The temple houses the statue of lord Narasi 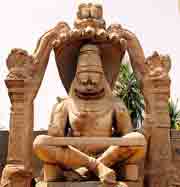 mha which is the largest statue in Hampi. The lord is seated in a yogic posture on the coil of a huge snake called Sesha. The snake is giant and has seven heads forming a canopy over the head of the lord. The idol of the lord has protruding eyes and serious facial expression because of which this is sometimes called as Ugra Narasimha. It is said that the present statue inside the shrine is incomplete.

The original statue also had the image of goddess Lakshmi sitting on the lap of the lord. The statue was gravely damaged during the battle fought in the past resulting in the decline of the Vijayanagara Empire. Only one hand of the damaged statue is present here. The hand is resting on the back of lord Vishnu. One can even see the nails and the rings on her fingers. This shows how intricate the carving was.

There is a mythological story attached to the Narasimha form of the lord. Lord Vishnu took the form of Narasihma to save his devotee Praladh who was incessantly troubled by his own father Hiranyakshap. He would tell Praladh not to utter Vishnu's name and worship his own father who had received a boon from lord Brahma. When Praladh refused to do so, his father decided to take his life but the protection of the heavenly deity lord Vishnu saved him. The lord took the form of Narsihma to kill Hiranyakshap.