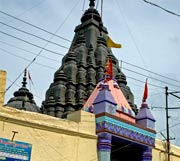 Vishnupada Shrine is dedicated to lord Vishnu, the preserver of the Universe. This shrine houses a pair of the footprint carved on a rock. It is believed that these footprints are of lord Vishnu and hence the shrine was named Vishnupada Shrine meaning 'footprints of Vishnu'. The shrine also houses the Naga(divine snake)which clearly indicates that the temple was built in the honour of lord Vishnu. Such footprints can also be seen on the rocks at the riverside and in the complex of the temple. These footprints are worshipped by devotees. The story behind these footprints is not known but they are considered sacred by the devotees. Sasivekalu Ganesha statue is another attraction located near the temple. It is a beautiful architectural piece built by the rulers of Hampi.