Versatility Comes Naturally to It 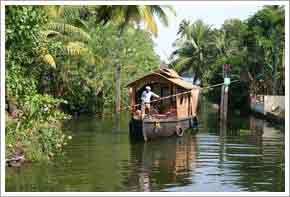 South India is a symbol of Indian heritage. It is a land dotted with beautiful temples reflecting how strongly its religion is interwoven into the life of its people. The swinging coconut palm trees, the sun kissed beaches, the mesmerizing backwaters, the colourful festivals, yummy cuisine, all this attracts millions of travellers to South India every year.
Its art and architecture leave the onlookers spell bound. Reflecting sheer beauty and grace, the temples, monuments and palaces of South India are its prime attractions. South India is the perfect place to see and experience the rich culture of India. Here traditions live in harmony with modern life style.

The Famed Destinations of South India Are:

Peaceful and beautiful, God's own country, an ethereal vision, a poet's dream, the epitome of beauty – these are the phrases used for destination Kerala. These phrases have come from the experiences of the people who have already visited this famous tourist spot of South India. Beautiful temples, backwaters, snake boat races, beaches, monuments, tea, coffee and spice plantations, Ayurveda and Meditation, houseboats, backwater resorts, exotic cuisine,Kathakali dance, wildlife sanctuaries – Kerala has so much to offer.

A home to more than 30,000 temples, Tamil Nadu is called the Land of Temples' The most celebrated temple of the state is Meenakshi Sundareshwar temple in Madurai. The people here are staunch believers of Shiva, Vishnu,Ganesha Lakshmi and Parvati. Each temple has a legend to tell. No festival of Tamils is complete without worshipping the heavenly beings. Marina beach in Chennai(the capital city) is the second largest beach in the world, Five Rathas temples in Mahabalipuram are incredibly beautiful,Silk saris from Kanchipuram are famous the world over and the Vivekanand Memorial in Kanyakumari serves peace in plenty, Botanical garden(housing a wide variety of flowers) in Ooty. Such wonderful are the attractions of Tamil Nadu.

Karnataka is quite a hit with tourists. It has numerous attractions to overwhelm the tourists. Mysore Palace,Srirangapatna Palace, Chamundi Hills, Virupaksha temple, Lalbagh garden, Tipu Sultan Palace and Museum occupy a prized places in the itinerary of the tourists. Hampi is one of the most famous village in Karnataka. It is a home to numerous ancient temples, some of which are in ruined? state. The beautiful architecture of these temple attracts millions of tourists every year. Some of the known temples are Virupaksha temple, Monolithic bull, Varah temple, Hemakuta, Krishna and Sugriva's cave. Another major highlight is Bandhipur National Park which is an abode of rich wildlife.

Pondicherry is a Union territory of India which famous for its serene beaches and peaceful aura. It is the perfect place if you wish to spend some days away from the maddening crowds of city. It was once under the rule of the French? who had left deep impressions on its culture. It has a French flavour in its architecture and cuisine. Sri Aurobindo Ashram in Pondicherry is? a wonderful place where people master the art of living a fulfilling life. It is an international institution. It is dedicated to the great Indian philosopher Sri Auribindo. Auroville city is one destination in Pondicherry which should not be missed by the tourists. Known as the 'City of Dawn', Auroville is a universal town where people from different nationalities, beliefs and traditions live together in harmony. The establishment of this town was an endeavour towards unity in diversity. Once you are done with these attractions, head for the Navagraha temple. Here all the nine planets which have great influence on our lives are worshipped.

Come explore the exotic destinations of South India with us!